The TIMALIE project deals with hierarchical learning procedures, that

enable the use of AI on autonomous systems. In recent years, great progress has been made with deep neural networks (DNN) that have successfully solved complex problems.  However, these require a large amount of computing power, which is a disadvantage for autonomous systems, since they are often equipped with limited computational resources. The limitation of the available computing power is often compensated with external resources (e.g. a cloud server).  However, data that endangers data protection, privacy or company secrets should not be transferred over the internet. In the TIMALIE project, hierarchical learning procedure are used to overcome the above mentioned limitations (limited resources and data security).

Ad-hoc networks have been scientifically investigated for several years. So far, however, only a small subset of the resulting technologies have 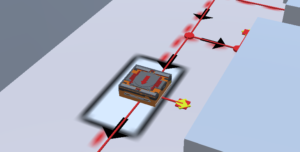 managed to establish themselves in industrial applications. In the course of Industry 4.0 further technologies are to be added. In this project, the requirements of industry for such networks are investigated, how well-known protocols can be used or adapted and how these technologies can best be integrated into the planned factory of the future. In particular, the use of ad-hoc networks with mobile robots in the factory is in focus. 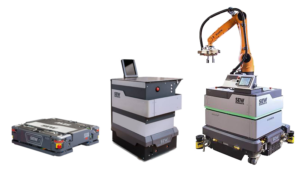 This project is being carried out in cooperation with SEW-EURODRIVE GmbH & Co.KG. The leading manufacturer of electric drive systems from Baden-Württemberg is also active in the field of mobile industrial robotics through factory automation. SEW-EURODRIVE offers unique opportunities to use and test the investigated systems in real industrial environments. 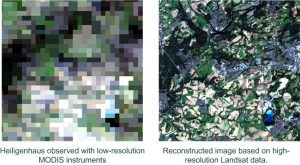 A library for efficient generation of remote sensing time series is developed in the scope of the Techs4TimesS project. A prototype implementation is available. The following images show Heiligenhaus reconstructed with the STARFM algorithm.

SatCom: Measurement of Satellite Internet Performance and
Modelling an Emulator

In SatCom project satellite internet has been evaluated. For that 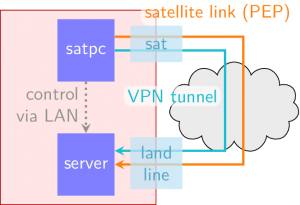 measurement software has been developed, which recorded performance values for several months. It did not record only data rates, but also latencies and jitter, as well as testing connection availability. These measurements have also been performed via a Wireguard VPN connection. Additionally local weather data and modem status data has been recorded. The measurement software can easily be adapted to measure the performance of another satellite internet connection.

In the next step the collected data has been used to parametrize a network emulator to slow down a connection exactly like it would be expected in the satellite internet connection for the current date and weather. For the modelling machine learning methods have been used. The emulator can be used on a small box inbetween the network line to slow it down in both directions. This way applications can be tested for their compatibility to satellite internet connections without actually having to use one. 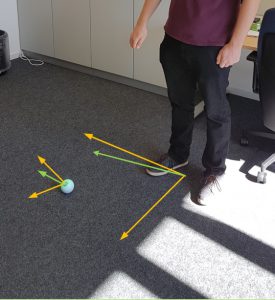 In many robotic applications is an interaction with a human operator desired or even required to achieve a certain goal. Especially in the field of mobile robotics, when then robot does not know its exact location, the interaction between a human operator and the robot is essential.

This project deals with a newly developed remote control concept for mobile robots. The focus lies on an intuitive control with simple gestures to command a spherical robot in its environment. The approach uses a low-cost time-of-flight sensor in combination with an innovative motion control concept. The Robot Operating System (ROS) is used to connect to the robot hardware.

The term service robotics summarizes different robotic applications dealing with the support of human operators in everyday tasks. The robot has to orient itself and solve a variety of tasks in an unstructured and dynamic environment. A high degree of autonomy and robustness is a necessary requirement to reliably solve a task. The ISR project addresses innovative approaches to achieve autonomous and intelligent behavior. The project is a cooperation between the "Applied Computer Science and Mathematics" group (Prof. Dr. Jörg Frochte) and the "Robotics and Computer Technology" group (Prof. Dr. Marco Schmidt) 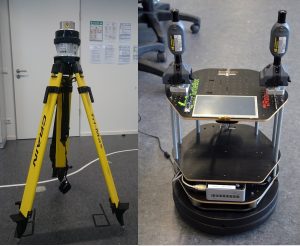 Actual focus of the ISR project is

If you are interested to do a bachelor or master thesis in this field, feel free to contact Prof. Marco Schmidt

As part of a development project, a software for consistent data analysis was written. The goal was the implementation of test scripts, which systematically check the correctness after migration to new software versions. Our automotive partner uses the software to keep the analysis of big data sets consistent over time.